What Are The Different Types of End-to-End Email Encryption?

Electronic mail has been around since 1978 and is being used by billions of users on a daily basis. Privacy was not a big concern when it was introduced, and therefore, it lacks the essential security features necessary for private communication.

Several attempts have been made to address privacy between the sender and recipient, but there is no standardized way to solve this problem. Companies are increasingly looking for an easier way to ensure email security and privacy.

Email encryption is one of the most widely used methods to keep email communications private and secure.

The email encryption market is expected to grow to $11.8 billion by 2026 at a compound annual growth rate of 23.1%. This rapid growth in the email encryption industry is an indicator of companies worldwide realizing the need for encrypted and secure email solutions.

There are several types of email encryption solutions in the market, making it harder to pick the right one for your business. How do you select which one is best for your company?

This article talks about three different types of solutions that can be used to achieve secure and encrypted emails. It compares these models with each other in terms of their design and ease of use.

What is End-To-End Email Encryption?

End-to-End Encryption (E2EE) aims to ensure no one but the intended recipient can see the message. In other words, for an end to end email encryption to be successfully implemented, the following must be true:

Emails typically go through several SMTP servers before reaching their final destination. TLS protects communication between servers. However, once it reaches the next hop, any administrator with access to the SMTP server can view and modify the message.

End-To-End Email Encryption prevents such modifications and guarantees that no intermediate software or an individual with access to the server can view or modify the message inside the emails.

What Is Transport Layer Security (TLS) and Is That Enough?

TLS stands for transport layer security, and as the name suggests, it only protects in-transit data. When you compose an email in MS Outlook, for example, the data typically goes through several routers and firewalls before reaching your company's SMTP server.

Therefore, this method does not guarantee privacy once the email has reached an SMTP server. Only end-to-end email encryption can solve this problem.

So let's look at what are the different types of E2EE and how do they work.

End-to-End Encryption can be achieved by several methods, as described below.

Method 1 - PGP (Pretty Good Privacy)
One of the oldest methods of encrypting emails is called PGP, which stands for pretty good privacy. PGP is based on public-private keys and works as follows:
The diagram on the right explains how Open PGP works.

The sender will need recipient's public key before encryption is performed. 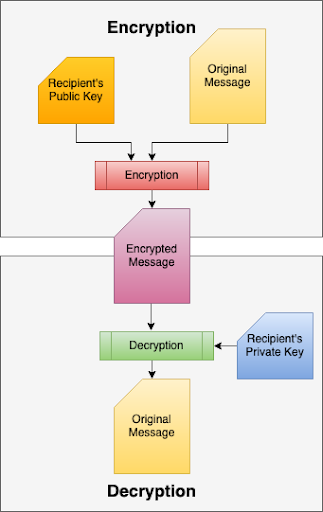 Although PGP is a secure method for enabling end-to-end encryption for emails, it never got tracking in the mainstream because of the complexity, and run-around users have to go through before making it work.
Method 2 - Email-to-HTTPS
One popular method to achieve E2EE is to transform an email into a web-based conversation, which is then used over HTTPS to ensure privacy.
The diagram on the right demonstrates the design concepts associated with such a mechanism.

Method 3 - Email to PDF
Another popular method to achieve E2EE is to convert an email into a password-protected PDF file.

We discussed three different approaches to achieve End-To-End Encryption with emails. Although every method gets the job done, the easiest way to use is Email-To-PDF, which converts the original email into a PDF document allowing the person with a password to view the message. Click here to watch a video demonstrating the ease of use inherently present in this approach.

Your email address will not be published.